Happy Holidays!
Just like the past two Christmases, the holiday season is still somewhat subdued due to the calamities we faced. But this time, it's kinda better. Maybe it's the optimism in the air, or the small blessings people are grateful for, but I sure am having a good time this year.

I'm not so sure how I truly was in the past 12 months. In terms of being a blogger, I am happy to say that I have been productive! Plus I got to befriend some of my readers I never thought I had which is really cool and everything.

My personal life isn't as perfect however. Sometimes I would just find myself in the deep trenches of depression and confusion. Those days are unavoidable, after all I'm only human and we all go through shitty times right? So I learned to let go and live life in an optimistic way. In the end the happy memories made the sad days worthwhile and the setbacks more meaningful. I am certain in saying I'm leaving this year behind as a stronger person and that, I guess, is more important. I regret nothing, 2013 had been one hell of a year.

I'm so sorry if once again I failed to post things in this blog for many days. I had a very busy week, and despite the temptation to push deadlines or put off a few obligations, I know I just can't do it. So what took place last week anyway? Here they are:

Resume and the Exit Interview
For graduating students, we have this responsibility on meeting the necessary requirements so we can walk up the stage. Part of the long list is finalizing our official resumes. This one is different since the school gave us a specified format and if we got through our Final grades at the end of this school year, they're going to bind everything up into one huge book. Fortunately I'm done with this in two day's time and even got my exit interview finished.

Yearbook Photo Shoot
The make-up artists were from Manila, and they know no Bisayan words. It was embarrassing whenever we blurt out some request in vernacular, and realized too late what's amiss and you have to translate everything all over again. As for my 'creative shot' I opted for sitting cross-legged on a stool since I have no other idea on how to creative it should be. I did the one leg over the other sitting position, like a yoga master, blew my mind when I discovered years ago that not everybody could do it. But apart from that, they were the coolest guys ever and the entire process was easier than what I had expected. I'm quite satisfied with my photos too and finished in time.

Greenwich IMC Plan Final Battle
This was part of our school's Junior Marketing Association series of activities in partnership with the Greenwich Pizza and Pasta Chain. My friends and I decided to create a team to try our hands at it. In a most surprising turn of events, we were included in the Top 5 paper. This is against other groups and other schools, so I guess I'm proud that we've come this far. 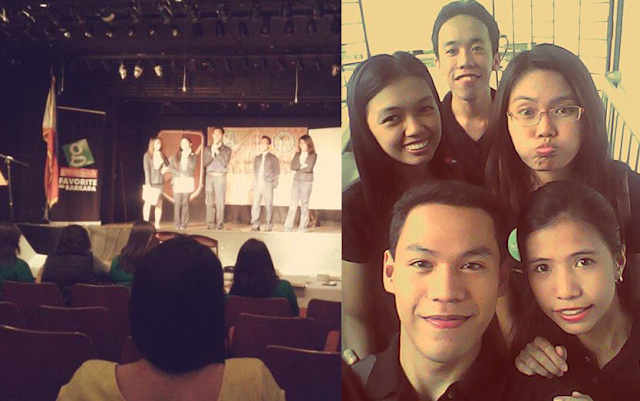 Our Final defense was hasty and we only got the fifth place. However everything's still cool since we were the only seniors who got in and at least, despite our busy schedule, we were able to present a good paper. Also there were enough food outside the venue to make us happier LOL. Anyway a huge congratulations to the winners!

Office 365 Reporting
Yep, despite all our quizzes, exams and readings, our instructor still found time for use to report about a broad topic such as Microsoft's newest product line. In fairness, I learned a lot from my report and made me contemplate whether to get an Office 365 or not since it's truly remarkable and efficient. Also I lost my Law book that night too. My emotions are equal parts of happiness and regret.

So yeah, like I said, I lost my Law book and we have and exam tomorrow. I might still be busy in the next few months, but as for now, I'm finally giving myself a permission to be lazy. After all, Christmas is near! Stress is huge no-no this season! I'll be continuing my 25 Day Challenge as well.

HAPPY HOLIDAYS EVERYBODY! LET THE FUN BEGIN!
No comments:

The Doodle for the Day! 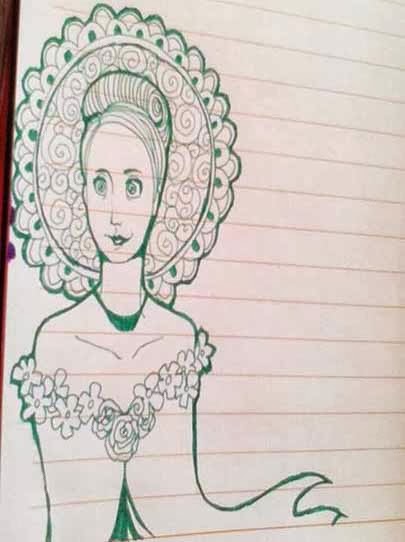 No seriously, made this a while ago. During our Philosophy class. Again. The worse thing is, we're going to have our Preliminary exams next meeting and all I did was doodle away like there's no tomorrow. Well, I was listening anyway, but with this kind of notebook, I will just have to prove to myself that I was truly listening to the lectures. Or else I'm doomed.

Another worsening condition is our classes. They're getting more demanding as the graduation date is finally at the horizon for us seniors to applaud. Too many reports to present, papers to write, money to collect and bills to pay. No pain no gain right? I'm not usually prone to complaining but I am currently in an environment where things happened that pisses me to no end. For example, teachers who are always absent, requirements being required at the last minute, expensive but unnecessary projects, weirdly placed expectations.

So maybe I will just have to doodle for a while. Makes me calmer these days. Never thought drawing will become my number one stress reliever T__T
No comments:

Email ThisBlogThis!Share to TwitterShare to FacebookShare to Pinterest
Labels: My Drawings, Personal

Japanese idols are often depicted as lucky individuals who have made it big, they represent the public and has a close relationship with their audiences. In order to do so, they are not supposed to be seen as intimidating. What's the golden formula then? They must be good, but they must not be perfect. Nowadays, there are two big names in Johnny's, namely SMAP and Arashi. Despite having sempai/kohai relationship, people just love to compare one against the other. 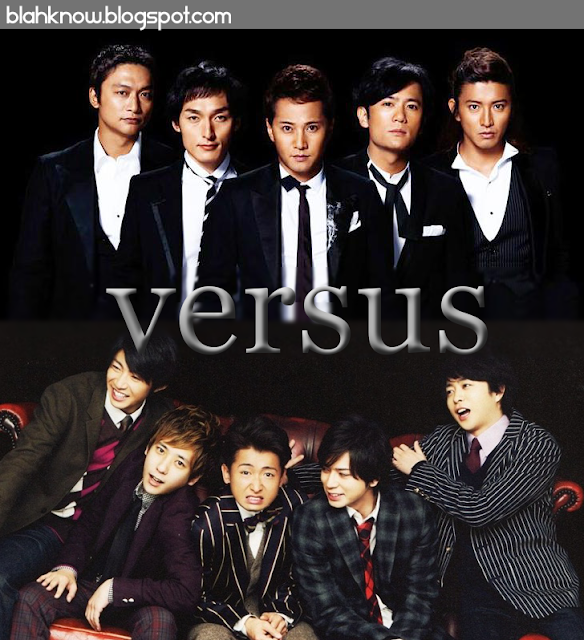 Describing it as a typical Friday night, Isaac said he was then hanging out with his friends Leah de Guzman, Charina Zarte, Nix Alano, Phoemela Barranda, Jake Cuenca, and Cruz at the Privé Luxury Club along with the bar's co-owner JM Rodriguez.

Isaac said Curtis was also at the place hosting a bachelorette party for a friend.

Then Anne got up to go to the ladies' toilet. Unknown to her, John Lloyd and Jake Cuenca followed her. The two boys, knowing that Anne was super "kikay" tried to pull a prank on her. They started banging the door of the toilet non-stop, getting louder and louder making Anne so agitated.

The two continued banging the door until they heard that Anne was about to get out.
While waiting for his drink along with de Guzman near the bar, they heard someone shouting from behind. Anne Curtis came out of the restroom of Prive, shouting “who’s banging my door?”
She saw JR Isaac and Leah de Guzman nearby. It was at this instance when the drunk Anne concluded that it was they who were banging the door earlier, and without a word she slapped them both.

Shocked by the scene, John Lloyd then suddenly emerged and approached Anne to tell her that it was he and Jake who did the banging. Anne, who was mad as hell, slapped John Lloyd and shouted at him with all her might, "You are an addict! "

For unknown reason, she screamed “You, what are you doing here?” when she saw Phoemela and pointed at her saying "I can buy you, your friends, and this club!"

Saying things happened so fast, Isaac recalled being ushered by the bouncers away from the drunk Showtime host.

"The management and [club] PR all came to our table and apologized to us. They saw the whole thing. They know we were the ones slapped. In the end, we stayed. We didn't allow it to ruin our night,” he said.

According to Isaac, he harbors no ill feelings toward Curtis because he has known the actress since way back.


“Hey everyone. I will be making my official statement now & after this, I will not be giving any interviews about this issue anymore. I choose to do this right away because I’ve always been an open book & I don’t like to hide anything…
For those who have read about the issue, yes, most of it is true. I admit to that & I have apologized to all parties included immediately… When I was told of my behavior AND the person who started all of this, due to this persons inappropriate behavior, apologized to me too… Just as I did. Which I accepted too. I choose not to go into detail because I’m not the type to ruin someone else’s name…
Now.. I had been on the super popular juice cleanse for 3 days & attended my best friends bachelorette that night, had one too many drinks which led to some of these unfortunate events. That’s why they say ‘Drink in moderation’. I will charge it to experience & a lesson learned. I’m sorry if I let any of my fans down…. As you all see, I’m just like any other person that makes mistakes in life…

Thank you to everyone that has messaged me about their support. With where I am today I owe all of you my honesty. Good night.”

The "Apology" is kinda off. Does she seriously think that her Juice Cleansing=Bitch Slapping alibi will actually sell? My mother had tried this diet a while ago and I never tasted a slap on my face, despite having provoked her for multiple times already. Yesterday, a smiling Anne Curtis appeared and proclaimed "Isang masaya at moving on na tanghali sa inyo my super sexy madlang people," during the opening of the noontime show. Hilarity ensues: