Bombing in the City 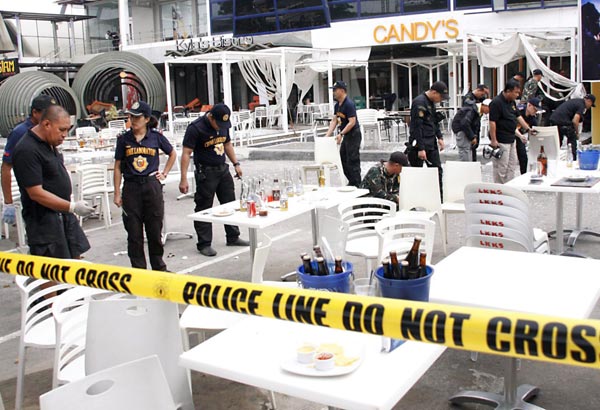 
CAGAYAN DE ORO CITY—Police said an improvised explosive device went off at around 11:30 p.m. at a restaurant in the popular Rosario Arcade just outside Lim Ket Kai Mall here.

The powerful explosion shattered glass windows and upturned tables and chairs at nearby establishments and damaged motor vehicles parked up to 30 meters away from the arcade.

Police said the explosion was so loud it was heard by people 4 kilometers away.
Killed outright were Misamis Oriental Provincial Board Member Lagbas, Dr. Erwin Malanay of Manila;  medical representatives Anthony Cañete of Iligan City; Ryan Estose of Megaheights Subdivision in Gusa district here; Emmanuel Palafox of Zamboanga City, and Antonio Paredes, whose address was still being verified. Forty-eight injured people were taken to area hospitals for treatment.

Senior Supt. Graciano Mijares, city police chief, said most of the victims were doctors and pharmaceutical sales representatives who had just attended a national convention of lung-disease specialists at a nearby hotel.


The task force created to investigate the bombing on Sunday said at least 10 witnesses are already cooperating with the ongoing investigation.

“Almost all the witnesses coincide to the first and second cartographic sketch,” said a member of the composite task force who requested anonymity as he is not allowed to issue any statement to the press.

He said this will symbolize the deep grief and mourning of ‘Kagay-anons’ over the tragic deaths. A provincial board member of Misamis Oriental was among those killed while 44 others were injured.

It was a truly tragic event, nobody saw it coming. The sadder part is that the death toll has now risen to eight according to other reports. We immediately heard the news last Friday and our first reaction was "Seriously? No way" It was just hard to imagine. Cagayan de Oro is a peaceful city, that a single disastrous vehicle accident could be the talk of the town for days.

Everything's back to normal right now, but still cautious of course. The case is gaining ground, they just released the following computerized sketches of the suspects today:

Well... The faces could be anyone's. but anyhow, I hope that this will be resolved soon and give justice to the victims.

Email ThisBlogThis!Share to TwitterShare to FacebookShare to Pinterest
Labels: Philippines