This week, photos of supposedly Arashi fans bowing to the posters of the boys are circulating around the Japanese social media. It is quite weird and very alarming. Here is Kotaku's aritcle about the situation: 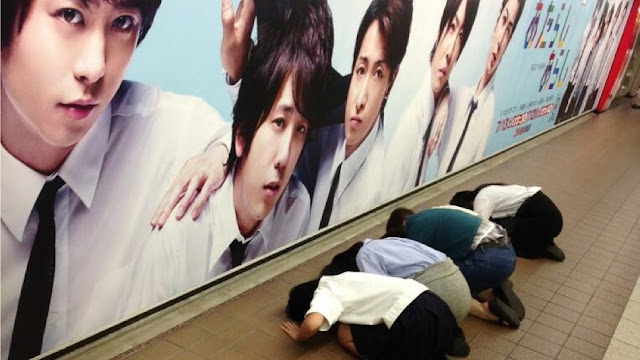 Have you ever heard of Arashi? It's a Japanese boy band that's so popular, that a poster of the group is drawing crowds, cameras, and grovelling. You might not know Arashi, but perhaps you've seen Letters from Iwo Jima? One of the stars, Kazunari Ninomiya, is a member of Arashi. The group has also appeared in Nintendo commercials, most notably for the 3DS launch, so there's that

Recently, a huge Arashi poster went up in Tokyo's Shinjuku station. It has been drawing quite a crowd and is being a dubbed a "sacred spot" for boy band nerds. This particular breed of otaku ("geek") is called "jyani-ota" (ジャニオタ). "Jyani" refers to Johnny's, the group's talent agency. Johnny's also manages pretty much all the other popular boy bands in Japan.

Earlier this week, a photo popped up on Twitter of an Arashi fan bowing in front of the giant poster. It was retweeted over three thousand times. People online in Japan seemed to be rather freaked out by the image, writing that it looked "scary" or "like some religion". Others pointed out that hardcore girl group fans seemed just as fervently frightening. (In the West, similar remarks could be made about hardcore Justin Bieber or One Direction fans.)

This isn't just a regular old bow. In Japanese, this style of bowing is called "dogeza" (土下座) and it's often translated as "kneeling down on the ground". As previously noted, it can be used for bowing in front of powerful and important people as well as apologizing for huge muck-ups.

Various Japanese sites point out that it seems to be a thing to bow in front of Arashi imagery. The vast majority of Arashi fans are not doing this, but a few seem to be.

Some of the young people bowing in front of Arashi seem to be doing ironically and for fun, with tongue planted firmly in cheek here. This is like a "We're not worthy" for boy band geeks. If only they knew they were!

The blog Majide had also documented the events from 2ch thread and gave us a clearer glimpse of what is happening:


If you pass by this Arashi poster in Shinjuku station, chances are you'll immediately be on Twitter

Some comments translated by Majide:

-I can't understand it.
Why take pictures of a poster?

-I hope people just cut out this sort of crap.
The foreigners will just think that the Japanese are a crazy bunch of people.
I guess that's what they're trying to do here though. 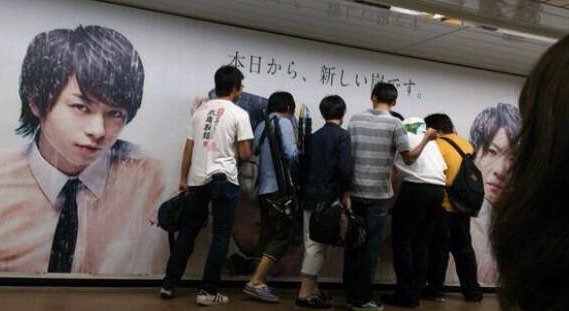